The History of AQUACULTURE

AquaCulture is most commonly referred to as Fish Farming which is the harvesting of aquatic creatures such as fish, crustaceans and seaweed. These techniques serve as a purpose to provide a sustainable ecological system to rear marine life for game and also commercial means, whether that be using pearls for jewelry or healthy fish sold in markets like Salmon and Cod. There are different origins of Aquaculture and today we will look into its history.

Where did AquaCulture Begin?

Aquaculture is an ancient practice that has been discovered in many civilizations throughout history.

China created a method dating back to 3500 B.C.E using artificial lakes when the waters lowered after river floods to farm Carp, the fish which symbolizes fortune and good luck. In fact, the oldest known document on fish culture was written by Fan-Li, a Chinese politician, around 475 B.C.E. (Eval, p.1, 2019).

The Romans were pretty skilled at breeding fish inside of ponds during the 1st-century B.C.E and focused mainly on Trout and Mullet. In wealthy homes, the rich adopted a method called “Assyrian Vivarium” which is where fish and crustacean’s are caught in a “pool” inside of a lagoon and are kept alive until they are ready to eat and are chosen by a guest. (The History of Aquaculture, p.1).

During the middle ages in Europe, Aquaculture was common in monasteries and used because fish were expensive and limited. In the 14th century, a French monk by the name of “Dom Pinchon may have been the first person to artificially fertilize trout eggs” (Eval, p.1, 2019). During the Renaissance age, Europe saw many treatises published on not only pond construction and maintenance, but how to care for fish and their specific diets and diseases.

Tomb Friezes in Egypt suggest Aqua Culture was established around 2,500 B.C.E where Ponds were used to harvest Tilapia. (FAO, p.1. 2019).

Is Aquaculture still around today?

To keep up with the popularity of human consumption of these various fish, almost all of the future seafood will need to be farmed. Below is a chart that shows the increase of farmed fish over several countries since 2001.

“With demand rising and many marine fish stocks already overfished, nearly half of all seafood now comes from aquaculture, which has grown at a double-digit clip for decades. Most of the growth is in Asia, home to 90 percent of fish farms. China, the world leader, imports additional fish to make fish oil, fish food, and other products” (Bourne, Skerry, p.1). 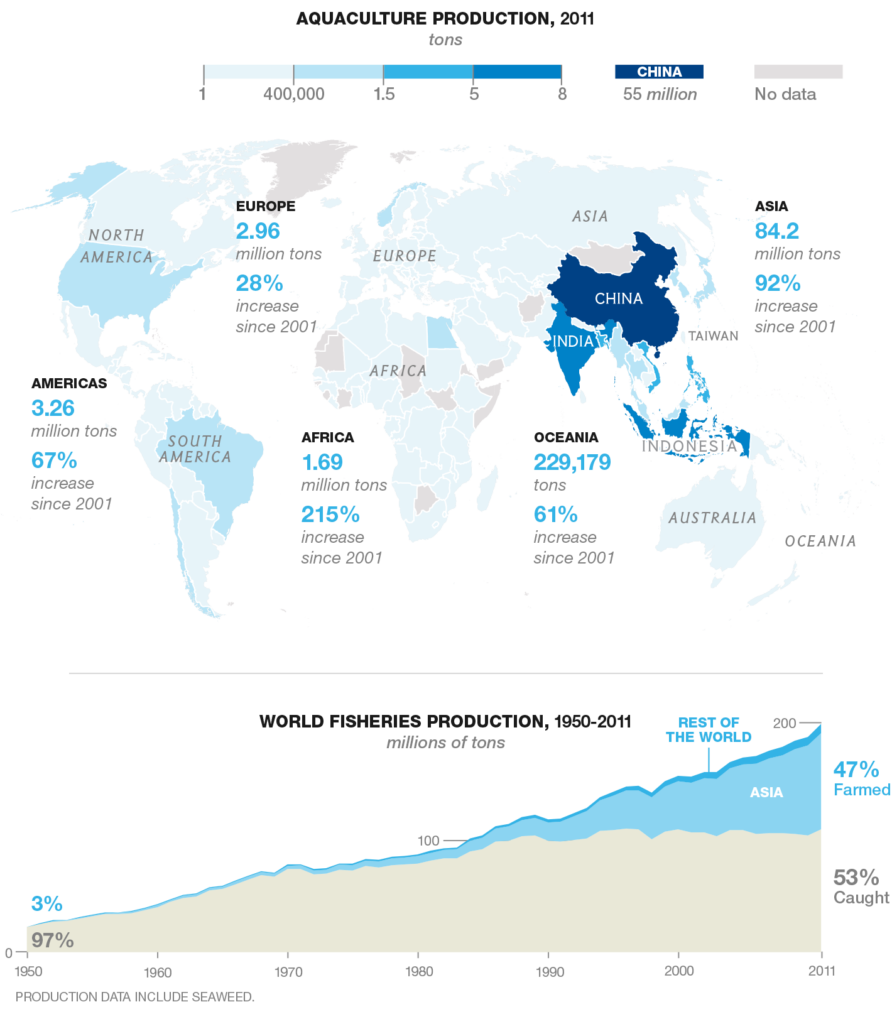 Aqua Ultraviolet supports the Aquaculture industry and offers product lines that will enhance your aquaculture farm! Our Viper Units are ideal for large commercial ponds or tanks and have a greater cell penetration capability that you can trust to keep your fish happy and healthy. Check out our Viper Sterilizers that accommodate high volumes of water with a plastic or stainless steel option.

Aqua Ultraviolet’s Classic series is perfect for both experienced and inexperienced farmers who need to control water quality for ponds and tanks. Take a look at our Classic Sterilizer options.  Both of these series use the same UV rays as the sun (only hundreds of times stronger) to penetrate and inactivate any free floating, single cell organisms and bacteria that pass through the unit.